Hola Blogitos,
Todays blog is about my number one Puerto Rican Reggaetton Idol –  Ivy Queen!  I felt I should talk  Ivy after searching for female reggaetton artists to mix into the  preshow music that we will play next week

at the opening of my Off -Broadway comedy “Long Island Iced Latina.”

Tell your friends in NYC  that some very cheap tickets $20 are available for an unforgettable LATINA night Off- Broadway.  Click aqui for more info and tickets http://www.teatrostagefest.org

Because women in this reggaetton  get no love or exposure from the guys who dominate it I could only find ONE genuine female reggaetton star IVY QUEEN -lesser artists Mala Rodriguez and Lisa M. were on the dull side. Ivy Queen seems like she could shoot you in a drive by. Her music (at least up till 2006) is unique and she’s got issues. She hasn’t produced too much new music in the last two years and  her look and sound  is transitioning from a Little Kim vibe to Mary J Blige in a telenovela. Regardless she’s the best we got. Ivy Queen  has been a little quiet for the last year because at 38 (according to wikipedia) she is working on getting her high school diploma (to send a good message to the youth.) 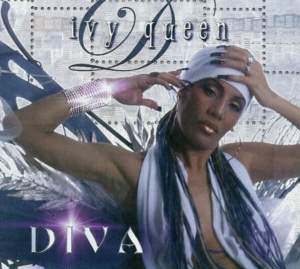 She got started in the music biz as a teenager, worked for years as the chick doing the hook for guys in reggaetton and recorded two solo albums. Ivy’s third album Diva, was released in 2003 and was a huge breakthrough. If you have never heard her before I’m thrilled to introduce you to her. She’s talented, Puerto Rican, fierce, with a deep commanding voice, long curley deadly nails, expensive boobs, and kind of looks like a drag queen in the best possible way. I’m not feeling her stuff after 2006 but I will buy her shit regardless. It irks me that she never got the recognition she deserved because she’s a woman and a Latina. There- I said it Rush Limbaugh!  I have posted here  five  videos I found on youtube that will give you an idea of her awesomeness.